Learn what to say, when to say it and stay stress free, safe, and professional under pressure

Angry situations don’t always start with very abusive or hostile behavior. Even a benign conversation can become acrimonious and destructive if each person’s behavior “triggers” aggressive behavior in the other. This process — the escalation cycle is, no doubt familiar to you because it often happens in close family relationships. If you have two family members who know each other well enough to “push each others’ buttons”, you have a situation where the escalation cycle is likely to occur.

The escalation cycle is a process where an individual becomes hostile or enters in an angry state of mind. If the customer is not treated in a way that helps him or her feel important and listened to, the customer gets more and more frustrated and abusive. In a typical escalation cycle, the employee over-reacts, which in turn, increases the anger of the client. If the cycle is not interrupted, the situation becomes an out-of-control crisis situation. That’s when people can get hurt.

Escalation doesn’t have to happen. It is important that you be aware of your own behavior in contributing to this cycle, particularly because you will bear the stress problems that a crisis bring. When the situation moves to crisis, the probability of violence increases, as does the probability that the person will cause unpleasantness after leaving by going to the media, complaining to a senior company official, calling a talk show or posting nasty messages on the Internet.

In many cases the cycle can be stopped by stepping back from the situation, not taking the bait, and appearing helpful, offering choices and acknowledging EARLY in the interaction. The escalation cycle needs to be stopped as early as possible, before it develops its own head of steam. It’s a lot easier to prevent hostile behavior than to deal with it once it’s full blown.

The escalation/crisis cycle is diagrammed below. Many of the tactics in this book are used to stop the cycle early on, and quickly. By doing so, you save both time and stress, since you reduce both the length and intensity of angry interactions with customers. 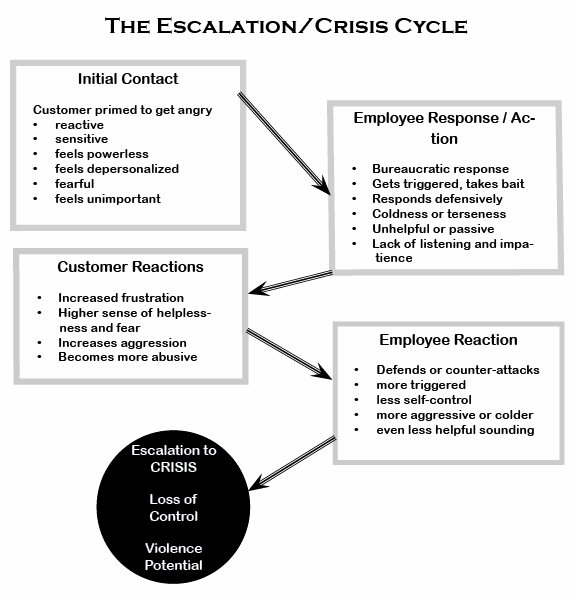 Excerpt from If It Wasn't For The Customers I'd Really Like This Job: Stop Angry, Hostile Customers COLD While Remaining Professional, Stress Free, Efficient and Cool As A Cucumber.

Help Us By Sharing